APAT Poker Squads Live kicks off at DTD this weekend, with the following schedule of events:

Each STT will have a 15 second shot clock, and 2 x 15 second time banks (with the Final Table having 2 x 1 min ‘time outs’ during which the player may confer with his team mates).

Poker Squads is a 4-person team event with Day 1 on Saturday having 3 rounds of STTs (20 x 9-max tables) for all team members, all playing to score individually from each round to contribute towards their combined team score to qualify their team through to Day 2.

Each STT winner will also win a ‘team mystery prize‘ from the prize fund for their team, picked by the STT winning team member immediately on completion of each STT in all 3 rounds, and currently set as 37.5% of the overall prize fund (12.5% per round of STT’s) tbc prior to the event depending on the final number of team entries.

Day 1 – STTs will have all 4 players from every team each compete in each of the 3 STTs, with members able to tag with any other member in an STT whilst the table is not involved in a hand – if there is any dispute between team members as to whether a ‘tag’ will take place, then the final decision rests with the player already at the table.

Points will be scored by team players’ finishing positions in each round of STTs and the top 3 scores for each team from each round will be combined to identify the top X teams at the end of Day 1 on Saturday (confirmed on Saturday once final team numbers known), with those teams progressing onto Day 2 on Sunday.

Day 2 – Final Table Qualifying Round will again have all 4 players, from every Day 2 QUALIFYING TEAM, each compete in an STT, with team members able to tag with any other team member in an STT whilst the table is not involved in a hand – if there is any dispute between team members as to whether a ‘tag’ will take place, then the final decision rests with the player already at the table.  Each WINNER (only) of each STT will qualify their team for a 10k starting stack on the Final Table.

Team members may tag between hands – but on this occasion the TEAM CAPTAIN will have the final say on whether a tag takes place or not (in the absence of the Team Captain then again the player at the table has the final say).

Each team on the Final Table will have 2 ‘time out’ cards which the player sitting (and ONLY the player sitting) may exercise at any time whilst in a hand AND THE ACTION IS ON THEM – they will each be for 1 minute during which the seated player may consult with his other team members (both may be used during the same timeout to extend the discussion time to 2 minutes).

So, if at the end of each of the following levels the ‘quota’ of lost players has NOT already been reached then the lowest stacked players will be eliminated at that time:

No antes will be in play.  A 15-second shot clock will be used.  Players CANNOT ask for a ‘count’ of another player’s stack – ‘dirty stacks’ are not allowed and chips are to be stacked in same colours/values and in acceptable sizes (eg 100 chip x 20 = 2k stack – to aid players to count stacks themselves) – vigilance throughout the STT is key!  These measures are put in place to ensure nobody ‘time wastes’ with the aim to slow play to get another player eliminated.  With ‘automatic eliminations’ at the end of levels, each STT will complete at 20:40 hours at the latest (or before if players ‘naturally bust’).  Players may be issued penalties during this STT if it is considered that they are deliberately time wasting, which may include sitting out of the action but still posting blinds, or loss of chips as a penalty. 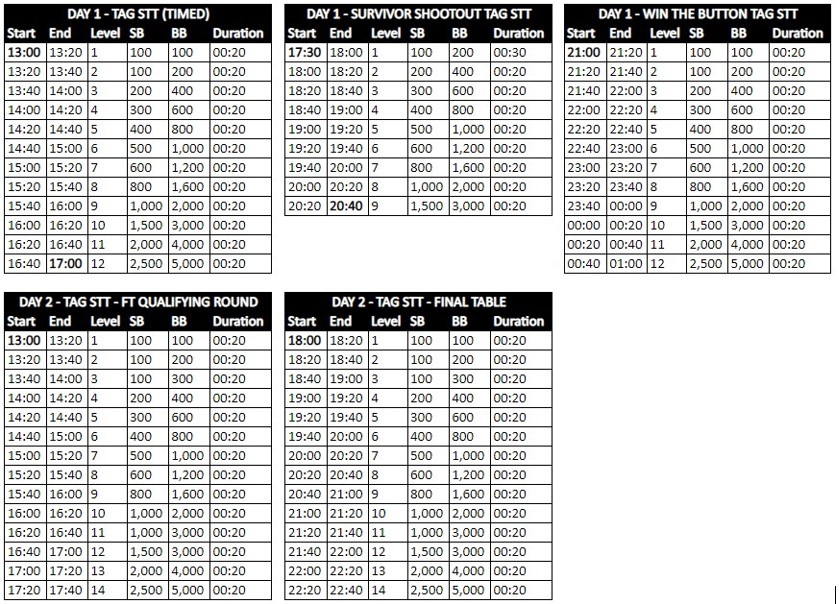