138 players descended on Cardiff for the triumphant return to the city of the Welsh Amateur Poker Championship. A couple of changes from previous seasons saw an improved blind structure, and two opening days to cater for the big demand for seats.

A fast-paced Day 1a ended with Rob Thomas, who is best known as long-term producer of Channel 4’s seminal Late Night Poker series, finish as chip leader on 114k chips, with Anthony Jones running him close on 112k chips.

Day 1b started with a brutal cold deck exit for Steve Rumming. His AK on a board of AK4 xK was behind the only hand that could beat it – the pocket Aces of David Gregory.

An impressive performance from 3 hour late entry Bashir Ahmed, saw him finish as the day’s chip leader on 114k, with Kyle Hyman in 2nd with 102k chips.

43 players made it to day 2, the top 10 stacks from the combined day 1’s looking like this:

Play started with a bang on day 2, with a flurry of early exits, including Linda Iwaniak. The recipient of her chips Rob Thomas, boosting his lead over the field.

Double-Gold Medalist Warren Jones was unable to add a 3rd to his collection, and departed in 20th spot when his AT could not overtake AQ in an all-in-pre-flop encounter.

Moments later, long time chip leader Rob Thomas was unlucky getting it all in pre-flop with AK to be outdrawn by Kyle Hyman’s QJ. This demolished Rob’s monster stack, and he was out shortly afterwards on the cash bubble.

With the 15 players left all guaranteed a cash, play accelerated towards the final table. The seating and stack sizes for the final table being thus:

An impressive line up saw some stand-out names:
Stephen Roderick marking his 6th APAT final table, finishing second on two of those occasions, and third on another two. One of his second places being in the APAT World Championship of Amateur Poker, when there were 425 entrants.

Shirley Cole, a previous APAT champion, having won the English Championship on 2014. She also finished 12th in the Main event at this year’s APAT World Championship of Amateur Poker.

Unfortunately, it was not to be a 2ndd Gold for Shirley, when her Nines were outdrawn by Guy Gullen’s Sevens in an all-in-pre-flop encounter when Guy rivers the flush.

Roy Powell was next out, shortly followed by Bill Law and Mike Gale. Anthony Jones, playing his first APAT event, finished in an impressive 5th place. APAT legend Rodders, having enjoyed a rollercoaster of a day, finished on the medal bubble in 4th place.

With the big money to play for, and the remaining 3 players close in chips, Dave Burt seemed the most aggressive and manages to build to his stack by stealing his opponent’s blinds. Before too long Jason Kemp had to make a stand with Kd Jh against the Ad Td in a preflop all-in encounter against Guy Gullen. When the board fades both hands, Jason departs in 3rd for £1,300 and an APAT Bronze Medal.

Heads up lasts almost an hour with a monster all-in on the turn in the end deciding the game. On a board of Js 5h 3d 6h, Guy moved all-in for 700k, and Dave called. Guy flips 4s 5s, vs. the Jh 6c of Dave. Dave is ahead with 2-pair, but had to avoid the open-ended straight draw and pair of Guy.

The river is dealt 10d, and Dave’s hand holds, making him APAT Welsh Champion. Dave wins the title, £3,100 in cash, an APAT Gold Medal, and entry into 2016’s World Championship of Amateur Poker. Guy Gullen finishes 2nd for £2,050 and an APAT Silver Medal. 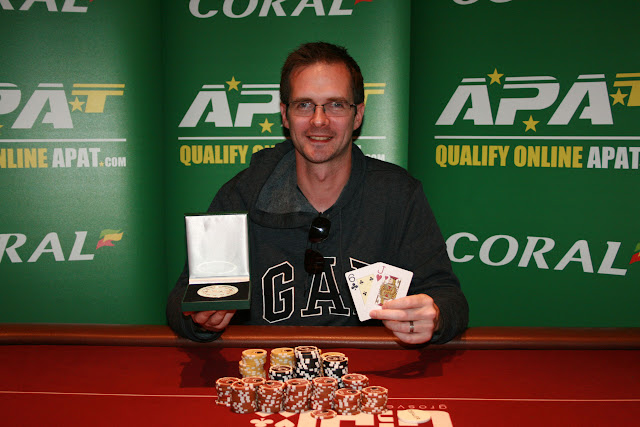 Footnote: And what a difference a day makes!

Steve Rumming goes from first out in the Main Event, to “not out at all” in the Hold’em Side Event, besting 31 other players and winning it for £320.

Warren Jones wins the casino’s own £2k guaranteed tournament, beating a field in excess of 50 players, and pocketing £700 for his efforts.