A great summer of sport will shortly conclude with the London 2012 Paralympics; and it seems strangely fitting that long term APAT member and wheelchair user, Carl Pilgrim, chose this of all weeks to take down the main event at the APAT European Championship of Amateur Poker (ECOAP) at Nottingham’s Dusk Till Dawn poker club.

Seven Card specialist Wayne Smith took down the first Gold of the four day festival when outlasting an extremely tough field in the Stud Championship.  Weswell Ellis took the Silver while Chen Tam failed to shake his poker bridesmaid record, taking his fourth APAT National Championship Bronze – an incredible feat in itself.

Next up was the European Amateur Team Championship, played over a series of hold’em and pot limit omaha sit & goes, heads up matches and a final multi table tournament.   The Republic of Ireland led the nine country field from the outset but a mere five points separated the leading four countries as the final MTT started late on the second day of play.  In a very exciting finish, the Irish maintained their momentum to take Gold, with England recovering from a faltering start on day one to take Silver.  A huge battle ensued between the Italian and Portuguese teams for the Bronze, with the Italians prevailing in the end.

The Six Max Championship on day two had 165 entrants and it was Bath’s Suzanne Hayward who outlasted the field to take Gold, beating 2011 WCOAP Stud Championship runner up Peter Thorpe into the Silver medal position, with Sharon Roberts taking Bronze. 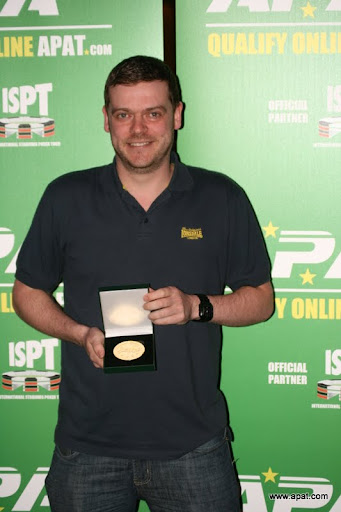 The main event of the festival, the two day European Amateur Poker Championship, brought in 276 runners and 53 remained at the end of an exhaustive first day’s play.  Pat Kelley led with 1.5m chips when the final table was reached.

Meanwhile, elsewhere at the carnivorous Dusk Till Dawn, a field of over 90 runners were fighting for the Omaha Championship, where last year’s WCOAP main event Champion Dave Garden took the honours, with Gordon Goodhall taking Silver and German international Stefan Roder taking Bronze.

Back in the main event and in front of a huge support at DTD and over 600 online railers, it was APAT regular Carl Pilgrim who took Gold, a Genting Poker Series seat and the £7,700 first prize, beating Dean Mardon heads up.  Pat Kelley took the Bronze medal.  Thanks to a final table appearance in the earlier Stud Championship, Pilgrim also won the Player of the Series award; a seat at the ISPT event at Wembley.